Cuttin the Costs of Haircuts

When you have as many boys as I have, it's always a money saver if you learn how to cut hair!

Boy's haircuts aren't really all that hard. I started learning many years ago and my husband, bless his heart, volunteered to be my guinea pig while I learned. I've never been to a barber school but I've watched many haircuts be given.

With John, it was a little scary. He needed a haircut that wasn't bad looking but we couldn't take the easy way by giving him a "buzz cut." Much to my surprise, the first haircut wasn't bad and as the years have gone by I have learned how his hair lays and it looks great when I'm done.

With our sons, they all started with simple "buzz" cuts because most of the time it was too difficult to get them to sit still. As they've gotten older (and I've had more practice on dad), they've graduated to regular boy cuts. I still give the little ones buzz cuts though. :) 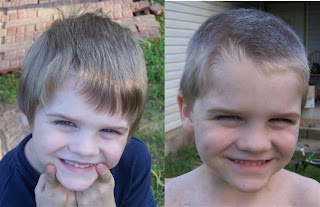 This is "Little T" who got the usual buzz cut....he wanted to be "bald" like his big brother who is in the military but we didn't go that far. As you can see, he does have a HUGE "cow-lick" in the front, which will make a regular boy cut more challenging. He is blessed with a double crown that swirls in opposite directions and another swirl in the back. It's interesting to say the least. 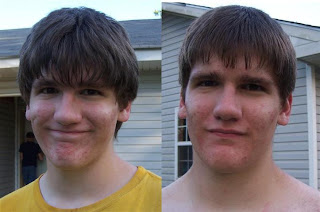 This is "Herman" (his nickname given to him by his basketball team because he's so tall...as in Herman Munster! LOL!). He is 16 and likes his hair a little on the longer side. His hair is springy. He combs it down and it springs back up. It's pretty easy to cut and he likes to use hair gel to keep it in place.

If you think about each one getting haircuts every 3 months, which is generous (they probably get them more often), then I figure I have given about 360 haircuts in 19 years. This does not include friends who have asked me to cut their husbands or sons hair. At about $8 per haircut that is, $2880.00 saved! During that time, I have owned two pair of clippers at a cost of about $20 for one set and about $50 for the other.

Therefore, I encourage you, if you have many young men in your family. Buy a set of clippers and learn to cut their hair. Don't worry about messing it up, especially when they are young, the hair will grow back. My favorite motto when learning to give "boy haircuts" is "if all else fails, put on a guard and buzz it!"

Promote Your Page Too

Mavis D.
I have been a stay at home wife and mom for over 20 years. I like to learn new things and I'm currently teaching myself to knit.